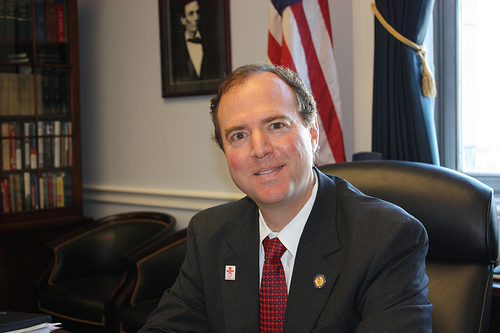 In a message on Armenia’s Independenc Day, Congressman Adam Schiff has reiterated his committment to deepening the ties between the United States, Armenia and, and a free and independent Artsakh.

Below is the full text of the message:

Today, I join with my Armenian-American constituents and Armenians around the world to mark the 30th anniversary of the independence of the Republic of Armenia.

The road to independence has not been easy, but time and time again, Armenians have proven that they are survivors. Having persevered through war and genocide, the Armenian people have emerged from these terrors united to secure a better future for their families and people. In the United States, Armenian-Americans continue to illustrate what an essential part of the national fabric they are with contributions in every field — from government, law, arts a

The United States will continue to advocate for the release of all Armenian detainees held in Azerbaijan, US President Joe Biden said in a message to Armenian Prime Minister Nikol Pashinyan on the occasion of 30th anniversary of Armenia’s Independence.

On behalf of the American people, I wish you and the Armenian people a safe and happy Independence Day.

Our two nations are bonded by history, family, and friendship, including 1.5 million Armenian-Americans whose contributions enrich and strengthen our bilateral ties. This year, we will mark 30 years of bilateral relations between our countries. We look forward to continuing to support the Armenian people on your democratic journey in the years ahead, including by

PanARMENIAN.Net – The chief of the General Staff of the Armenian Army, Lieutenant General Artak Davtyan on Tuesday, September 21 dismissed concerns about the safety of an interstate road in the country’s Syunik province, which, in the aftermath of the Second Karabakh War, also passes through Azeri-controlled territories.

PanARMENIAN.Net – Armenian Foreign Minister Ararat Mirzoyan will meet with the co-chairs of the OSCE Minsk Group in New York in the coming days, the Foreign Ministry reports.

The Minsk Group is co-chaired by Russia, France and the United States, with diplomats from the three countries mandated to help the sides to the Nagorno-Karabakh conflict find a peaceful resolution.

Mirzoyan will travel to the United States on Tuesday, September 21 to participate in the 76th session of the UN General Assembly. The Armenian foreign policy chief i

US Secretary of State Antony Blinken has sent best wishes to the people of Armenia on the 30th anniversary of independence.

“In the three decades since Armenia rejected oppressive communist rule and declared independence from the Soviet Union, the United States and Armenia have developed a strong partnership based on respect for human rights, the rule of law, and democratic institutions.  We appreciate Armenia’s dedication to both these shared values and to its international commitments that play such a vital role towa

PanARMENIAN.Net – The situation on a key interstate road in Armenia’s Syunik province makes the need for negotiations and discussions between Armenia and Azerbaijan more vivid, U.S. Ambassador to Yerevan Lynne Tracy said in an interview with the Public Television on Monday, September 20.

Tracy’s remarks came amid months-long tensions on the border with Azerbaijan and the latter’s incursion into the sovereign territory of Armenia since mid-May. In recent weeks, Azerbaijan has at least once blocked the road – which in the aftermath of the Second Ka

PanARMENIAN.Net – On September 21, Armenians throughout the world are celebrating the 30th anniversary of Armenia’s independence.

With a unanimous national vote 30 years ago, the third Republic of Armenia was born on September 21, 1991, to give the Armenian people the right to build their future, be the masters of their land and regain statehood.

On September 21, 1991, a referendum on Armenia’s secession from the USSR was held, with 94.99% of the people voting for an independent and democratic Armenia.

PanARMENIAN.Net – President Armen Sarkissian on Tuesday, September 21 is the 30th anniversary of independence of the Republic of Armenia, as the country is going through a “critically difficult situation, with many problems and challenges,” such as the aftermath of the Second Karabakh War and the coronavirus pandemic.

“For thirty years, due to various objective and subjective reasons, we have not been able to fully realize the opportunity provided by independence, develop our victory and success. Everything seemed to be there for it, fr

France will spare no effort to find a lasting solution to the conflict within the framework of the OSCE Minsk Group Co-Chairmanship, French President Emmanuel Macron said in a congratulatory message to Armenian President Armen Sarkissian on the occasion of 30th anniversary of independence.

“I appreciate the significant path that the Armenian people have taken exactly 30 years ago since gaining independence to build a modern, democratic state. Thus, overcoming a number of trials, your country has managed to strengthen the activities of the institutions,” Mr. Macron said.

“France and Armenia are connected with a privileged relationship deeply rooted in history. These close and trusting friendly relations continue today in all spheres. I hope that this connection, whic

PanARMENIAN.Net – Iran expects Armenia to build an alternative road through Goris as soon as possible to replace the one recently blocked by the Azerbaijanis, the Ambassador of the Islamic Republic to Yerevan Abbas Badakhshan Zohouri said on Monday, September 20.

Zohouri reminded that after the 44-day war in Karabakh, a trilateral statement was signed by Armenia, Azerbaijan and Russia, and although some sections of said road went under Azerbaijan’s control, the sides did agree on the unhindered movement of transport along th